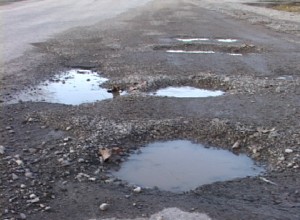 Despite almost a third of the County's population living in Northampton, figures unveiled by the Liberal Democrats today show just 9% of Northamptonshire's road budget was spent in the County town last year.

"This is a disgusting admission" commented Cllr. Sarah Uldall (Lib Dem, St. Georges), spokesperson for the Liberal Democrats on transport and roads. "While Northampton traffic grinds to a halt, desperate for a completed ring road, the Tories spend Â£32m on a bypass around Geddington where the Council leader lives. Meanwhile they do nothing for the County town. Our pavements are crumbling and our roads are in tatters."

"Apart from the enormous savings it could generate, our belief in fairness and in localism is why we are calling for real, local control over decisions like this through 3 new unitary Councils" added Sarah.

A unitary Northampton would control it's own spending on services currently controlled by the Tories on the County Council, whose majority is primarily based in rural, sparsely populated areas of Northamptonshire. These services include roads, social care and oversight of the fire department.