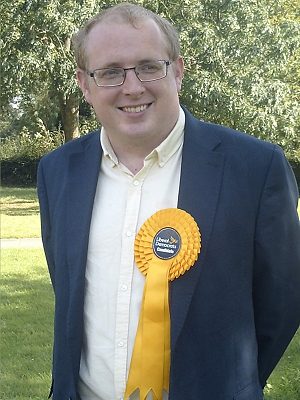 The Liberal Democrats have chosen the Kettering-born teacher Chris Nelson to fight for Kettering constituency for the December 2019 General Election.

Having been brought up in Kettering, Chris grew up on the Ise Lodge estate and, having studied both law and science, he now works as a secondary school chemistry teacher.  He has contested the last three elections for the Liberal Democrats, last contesting Kettering constituency in 2010. Finishing second in Kettering in this year’s European Parliament elections with 17% of the vote, the Liberal Democrats are committed to fighting for a People’s Vote in order to stop a ‘no deal’ Brexit.

“Being both bisexual and having a stammer, as well as through my work as a teacher, I know how important it is to tackle the barriers that stop people from succeeding in life and to stand up for our right to be different. That’s why, as well as fighting to stop Brexit, I am also pushing to end child poverty, to protect human rights and for a properly funded health and education system.”

“By making it harder to run a business, harder for the NHS to recruit staff and by pushing down the value of the pound, Boris’ no-deal Brexit blunder threatens to set our country back a generation. David Davis once said that a democracy that cannot change its mind is not a democracy at all: I believe in giving local people the chance to make the final Brexit decision for themselves.”

“Fairness, tolerance and social justice are all hallmarks of what makes modern Britain a fantastic place to live, but Boris Johnson and Jeremy Corbyn are instead pushing their parties to extremes. It is time to give Britain’s moderate majority the chance to vote for a liberal and centrist government that better reflects modern Britain.”

“ I look forward to once again speaking to local people over the days and weeks ahead.”

You can find out more about the Liberal Democrats in Kettering at www.northnorthantslibdems.org.uk