Liberal Democrats in Daventry constituency have chosen local resident Andrew Simpson as their candidate for the General Election on 12th December.

Andrew stood at the previous 'snap election' in 2017.

He is an experienced local and parliamentary campaigner having increased the Lib Dem vote share in every General Election where he stood as a candidate. In 2010 he stood in Northampton North constituency where he came within 5% of taking the seat from the Conservatives.

He is also former Northampton Borough Councillor where he served on the Council for 16 years during which time he was Chair of the Overview and Scrutiny Committee as well as Deputy Opposition Leader.

He moved to Kilsby in the north of the constituency in 2014 and is an active campaigner in his local community and a member of the Braunston & Crick area Lib Dem FOCUS Team. 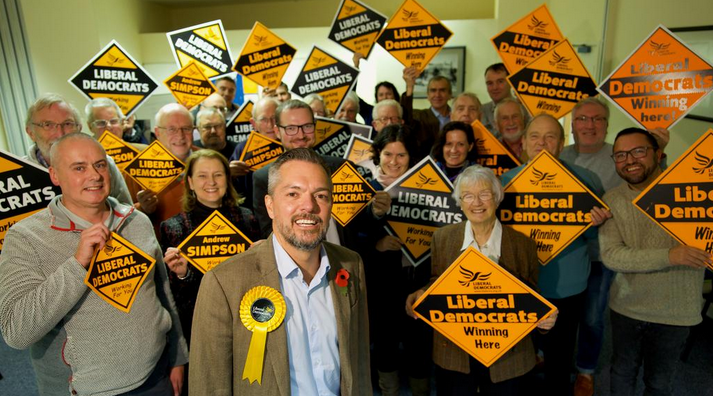 "I am delighted to be the Liberal Democrat candidate for Daventry constituency," said Andrew. "The Lib Dems are becoming established as the main opposition to the Conservatives in this area. We won the Daventry District Council (DDC) by-election in Brixworth back in July, taking a safe seat from them, and then last month we came second in the Abbey North DDC by-election. In both contests Labour dropped to third place."

"My message to the voters of Daventry is clear: Boris Johnson & Jeremy Corbyn are pushing Britain to the extremes. If you want a Britain that is open, tolerant, committed to social justice and to our country playing a positive role in the world then back the Liberal Democrats".

"The current Conservative MP for Daventry is an architect of the Brexit mess. He and his colleagues in the European Research Group (ERG) have held this country to ransom. Their obsession with the EU has caused the country to become divided and inward looking. They blocked Theresa May in finding a solution to the Brexit mess and they now seek to leave the EU regardless of the consequences and the damage it will do. We need to stop them."

"We all want to see an end to this mess so the country can move on and our politicians can start to deal with the real issues that are impacting our lives such as the Climate Emergency, the lack of affordable housing, job security and protecting and supporting our wonderful NHS. To do that we need to Stop Brexit".

"A Liberal Democrat Government would do just that so at last the country move on."

"The Liberal Democrats came a clear second in the constituency in 2010 and following the recent Council by-election results have taken a major step in regaining the position as the Conservatives main challengers."

For more information on the Liberal Democrats in Daventry, go to https://daventrylibdems.org.uk